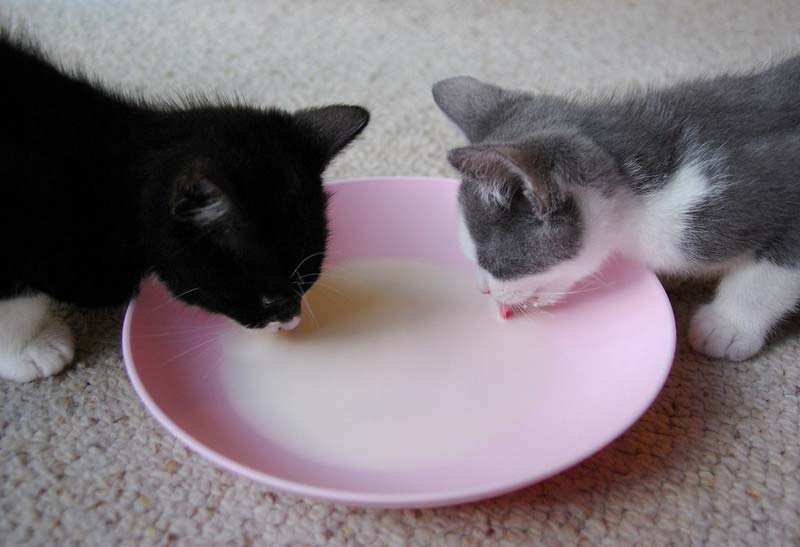 Most of us grew up watching Tom & Jerry in which Tom gleefully sips a bowl of milk. Many cartoons and movies also showed us the stereotype of cats drinking milk and waiting for the milkman to arrive. Is there truth to such stereotypes? Can cats truly drink milk or is it just an effect of mass media?

Let’s break down the facts in this article where we explore facts about milk and cats. If you want to know if it’s safe to feed your cat milk, and what type of milk you should give them, read on below to find out more.

Is milk safe for cats?

Yes, cats can safely drink milk, but with caution. Vets usually don’t want your cat to become dependent on milk alone, even if they love drinking milk from the bowl. Why is that?

Milk is made with lactose, which your cat’s tummy cannot digest, unlike with human stomachs. Some cats are good with different kinds of milk but some aren’t. If you have a mixed breed or a stray cat, they might do well with any kind of milk but with purebreds, you might have a problem.

To test if your cat is okay with milk, give them only 1 tbsp. at a time and if they aren’t getting tummy aches, it’s probably safe for them. Although your cat may like milk, it’s still not that much of a nutritional value. It is safe to feed, but it won’t benefit your cat nutritionally.

Underweight cats might benefit from milk because of the high-fat content. However, too much milk is not that ideal for your cat. Nonetheless, you may find your cat reacting positively to milk. Here’s what experts concluded on their research about cats and milk: cats get relaxed by drinking milk.

With that said, there are more ways to help calm your cat down other than drinking milk, so it’s not a good training habit to depend on all the time.

So, you might wonder, what’s lactose? Well, it’s a type of sweetener that’s naturally found in dairy products, which includes milk. Cats cannot digest lactose unlike humans, which is why your cat may get a bad tummy ache if they keep ingesting milk.

However, kittens are a whole different story, as they can somewhat digest lactose. Regardless, regular milk usually doesn’t contain any kind of nutrient that’s beneficial to cats at all. Moreover, after the weaning stage, kittens can no longer properly digest lactose.

When your kitten turns into an adult, they might experience stomach problems, vomiting, loose stools, and whatnot due to drinking milk or other similar dairy products. Aside from that, milk may affect the quality of nutrients that were obtained from other foods.

In short, milk isn’t ideal for cats, when you look from a medical standpoint. However, some owners have been feeding their cat milk and they handle it just fine – not all cats are the same.

In some cases, cats could develop food allergies. One of these food allergies includes lactose, as well as casein – a type of milk protein. You’ll easily spot when your cat is allergic to milk when they develop redness on the skin.

If your vet diagnosed your cat as being allergic to lactose and casein, by all means, avoid feeding your cat milk! Look for other alternatives instead.

Which milk is safe for cats to drink?

Although we still believe that milk isn’t essential to a cat’s nutrition, if you still want to go ahead and give them milk, there are safer alternatives. Fortunately, there are various types of milk out there, whether natural or processed.

Our general rule is to not feed them with milk that is plant-based since cats are naturally carnivorous in the wild. We also don’t like them to have too much sugar so we advise against sweetened milk formulas. Here’s a list of cat-safe milk:

Okay, this might not be technically a milk type, but many companies are already recommending it. Cat-Sip is one of them, which is a type of low-fat milk that was specifically formulated for cats.

Due to the inclusion of taurine, it is a good supplement for kittens and cats alike. Since it is almost entirely lactose-free, it is generally safe for cats to digest.

Cow’s milk is the easiest milk to access in the market. However, since many humans are lactose intolerant, many companies have started developing such formulas that do not have lactose in them. These formulas are safe for your cat.

If you’re a fan of skim milk, it’s safe for cats as well, so long as the fat content is very low, preferably at 1% (much like Cat-Sip mentioned above). What we don’t want for your cat is to take in too much sugar and fats from milk so that they live healthier. Never give your cat cream-based milk.

Some pet owners might be tempted to give their cat raw cow’s milk, but you have to be careful. Make sure that the cow’s milk is not pasteurized.

Cow’s unpasteurized milk will cause fewer adverse effects to your cat as compared to pasteurized types. Raw milk has natural enzymes that break down lactose so your cat can easily digest it (as they have no mechanism to digest lactose on their own).

Much like cow’s milk, goat milk is also okay for your cat when fed properly and in small amounts. Again, make sure it is raw and unpasteurized as your cat cannot digest anything with lactose in it (and it should have enzymes).

When you compare goat milk to cow’s milk, the former has lower lactose levels, which is good news for your cat. Aside from that, taurine and other important vitamins and minerals can be found on goat’s milk in a much higher amount when compared with cow’s milk.

This might be a bit too obvious, but this also counts as milk that cats (kittens) can have. A queen’s (mother cat)’s milk contains all the nutrients that are needed by her kittens to grow, especially taurine.

Taurine is not only good for your cat’s eyes – but it’s also important to keep them strong against diseases, to keep their tummy in check, for their heart health, and healthy breeding (in case).

Arginine, on the other hand, is important for kittens in preventing cataracts and stunted growth. It also keeps their appetite at the right level.

Which milk is not safe for cats to drink?

Now that we’ve talked about which kind of milk can cats drinks, what milk should your cat avoid? Here are some of them:

Although soy milk has been a craze nowadays due to its health benefits to humans, soy milk should not be given to your feline friends. The most obvious reason is that soy is plant-based and anything plant-based doesn’t go with a naturally carnivorous animal.

Soy also contains carbohydrates, which cannot be naturally digested by a cat’s tummy. That’s also why cats aren’t designed to take in anything that comes from a plant. Aside from that, certain cats could have soy allergies, so make sure you ask your breeder about their history.

Nut-based kinds of milk such as almond milk are also a no-no to your cat. Even though almond milk is lactose-free and is low on calories, some cats could get pancreatitis due to the oils found in almond nuts.

Even though you like almond milk because you want a chance to slim down due to its lower amount of calories, almond milk is not a good idea for cats!

Any milk that has been given added sugars or artificial sweeteners, such as condensed and evaporated milk, is not healthy for your cat. That’s because not only do these milk products have indigestible carbohydrates for your cat, but they’re also too sweet that your cat could become more prone to diabetes.

Much like with almond and soy milk, coconut milk should also be out of the list of safe products for your cat. That’s because coconut milk is also plant-based and has a ton of oils, which aren’t good for your feline friend. However, when it comes to coconut products, coconut oil is known to be safe for cats as advised by vets.

Except for their mother’s milk, the short answer is no because kittens already get the nutrients that they need from the queen’s milk.

However, you can give them kitten milk replacer in case the following situation happens:

There are many kitten milk replacers available in the market. Just to be sure, talk to your vet on what’s the best brand or formulation for your kitten depending on their situation and physical health.

Perhaps you’re thinking of adopting or purchasing a new feline companion and have it narrowed down to British Shorthair and Main Coon Cat Breed. If you are interested in learning more about...

You might think that all shorthair cats have the same qualities. However, that’s not the case, and it can be downright perplexing when deciphering between certain breeds. Adding to that...